Query Letters: When (Not) To Talk About Multiple Books, Including Sequels, A Series, And Other Projects 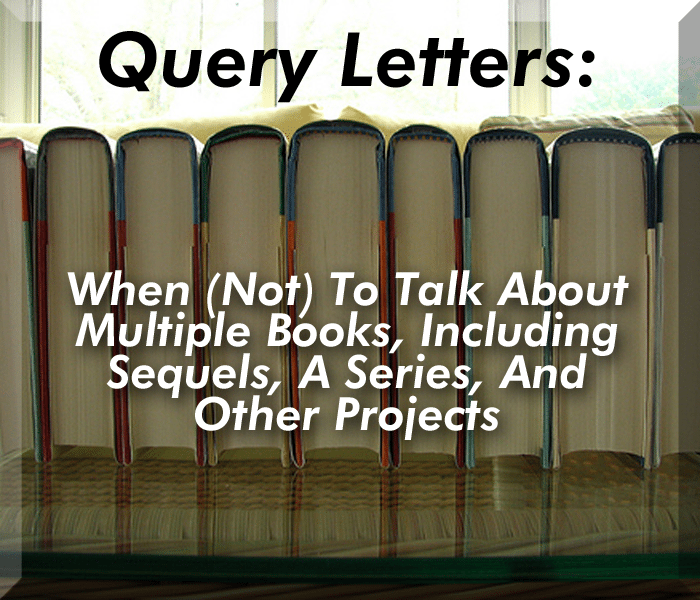 Though every writer’s situation is unique, here are some things you’ll want to take into account before you mention other projects when you are pitching via query letter.

Books designed to be part of a series. Certain books are by their very nature meant to be part of a series—such as some fantasy and mystery novels. But always keep in mind that before your agent can sell a second or third book, she or he has to sell a first book. So focus on book one, and then casually mention that the book could be (or is being) developed into a series (to make it clear that you’re not going to put the cart before the horse by pitching second and third books before the first one has proven that it is viable).

Manuscripts you wrote a long time ago. Many new writers who do not have writing credits tend to include phrases in their bios such as “I have written five books.” This leads the agent to wonder: five published books (if so, why didn’t the writer mention the publisher?), five self-published books (if so, what is the writer trying to hide?), or five books that are sitting under a bed somewhere (if so, will the writer try to pawn off those stale old manuscripts on the agent who takes that writer on?). If the writer is deliberately vague about the “five books,” the agent will generally assume the writer is an amateur. Rather than mention that you’ve written five books that you were not able to publish traditionally, it may be better not to mention them at all. Focus on building up your bio with publication credits in the literary magazine market or by demonstrating a commitment to the craft.

Spin-offs. Some writers will indicate that they are already in the process of spinning their single title book into an alternate venture—perhaps developing the story of the secondary characters, or perhaps taking the story to the next level with a prequel. Again, be sure you’re only pitching one book at a time. If you’ve already completed your spin-off projects, it may be better to hold off on mentioning that those projects are already complete until you and the agent are in serious talks.

Other unrelated books or genres. If you’re writing a romance novel and you want an agent to work with you on another project (a thriller), it’s best to focus on one project at a time. The query letter is not necessarily the place to mention multiple projects. If an agent shows interest in one of your projects and you feel you can develop a rapport, then that’s the time to mention your other ventures. But until that point, try not to overwhelm him or her.

The moral of the story: an agent can only represent one of your books at a time. Generally, if you are entering a new relationship with an agent, you don’t want to overwhelm him or her by suggesting he or she represent previous projects, future projects, or side projects. A good query letter pitches one book only—and perhaps in certain circumstances, it may casually allude to other projects (if the writer is careful in his or her allusions). And if an agent asks if you have any other projects in the works, then feel free to share. But in general, play it safe by focusing largely on one book in your pitch.

At Writer’s Relief we work with our clients to write strong query letters, and we advise them on strategies and tactics regarding the submission process. For more information, visit www.WritersRelief.com.

QUESTION: How many manuscripts have you written?