Pen Names: What You Need To Know About Using A Pseudonym 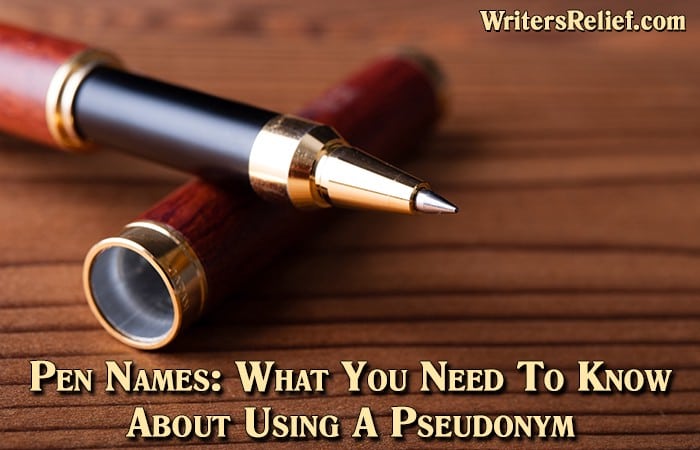 Many writers use pen names—but there’s a right way and a wrong way to publish your book, stories, poems, or essays under a pseudonym. Actors and artists often use fictitious names, and writers sometimes choose to create under a different persona as well. So how do you know if you should use a pen name or not? What are the advantages and disadvantages of noms de plume for writers? At Writer’s Relief, we know there are several good reasons to use pseudonyms—and there are also some reasons not to.

Writing under a fictitious name was a very common practice in the eighteenth century, when writers and journalists used pseudonyms to pen controversial or even illegal articles and letters to the editor. Some examples of writers who use pen names: Ben Franklin used this practice extensively, and when he used a pen name, he often created an entire character to go along with it. Dean Koontz and Stephen King, both prolific writers, used pen names at the suggestion of their publishers to avoid overexposure. And George Eliot was actually Mary Ann Evans, who used a male pen name in order to be taken seriously in a male-dominated society.

These days we enjoy more freedom of expression than ever before, and writing under a pen name is more a choice than necessity. If you’re a new writer, making the decision to use a pen name is probably not top priority for you, unless you fall under one of the categories below. Your job is to focus on your work, not your name; and you want to get exposure, not hide your true identity. As you begin to build up writing credits, think of yourself as a product. Unless your “brand name” truly does not reflect what you want the world to see, there’s no good reason to protect your identity—unless, of course, you’re writing an exposé on the mob.

Why Use A Pen Name?

There are several reasons why writers choose to adopt pen names.

Another author “owns” your name. Your mother was a big fan, and your name is Sylvia Plath.

Your name doesn’t fit the genre. Bruiser Ratchet or Belinda Blood may want to choose more romantic names to break into the romance genre. (However, Bruiser Ratchet would be a great name for a detective/suspense novel writer, and Ms. Blood’s name suits the horror genre to a tee.)

You want to conceal your real identity. You’re a prim and proper physics professor at a large university but write erotica on the side—under an assumed name, of course. A pen name would also protect the author from political persecution or prejudice. Imagine writing about homosexuality or even atheism from a personal perspective in the 1950s without using a pen name.

Your name is too hard to pronounce and/or spell. If your name contains ten syllables and several Xs and Zs, perhaps a shorter, easier-to-spell name would be in order. And if it can be pronounced correctly by the average reader, that would be good. Remember: easy to say, easy to spell, easy to remember.

You’ve been burdened with a truly bad name to begin with. Consider Adolf Mussolini. Ima Hogg. Mercedes Binns. Tanya Hyde. You get the picture.

You want to cross genres. Anne Rice, famous for her vampire series, uses pen names for her collections of erotica, and she would probably take up a new one if she wanted to move into Sci-Fi or Westerns.

You’ve been published before, and sales were not good. In this case, your publisher may suggest a pen name to help boost sales of your new book (and break the association with the poorly received book).

The minute you decide to take on a nom de plume, be prepared to stick to that name in your correspondence and at writers’ conferences and book signings. You want people to associate that name with you, not give them a slew of different names to remember.

Hint: If you do choose to go with a pen name, choose a name that’s not too generic or linked to someone else. Try an online search of your prospective name to see what comes up. You don’t want your readers to confuse you with the famous foot fungus specialist of the same name.

Literary agents and editors will expect a certain protocol for writers using pen names, especially if submitting a query using a pen name. When sending queries to editors or literary agents, use the name you want to publish under for the byline and use your real name in the information block. If you’ve been published frequently under another name, make reference to it in your query (“I’ve been published previously under the name ABC, but in my foray into Genre #2, I’ve decided to use the name XYZ”). In the submission process, you don’t want to confuse the editor or agent by using multiple names.

When you are ready to sign a contract, make sure your editor and agent know your real name and its correct spelling; your contract should include a space for both names as well. Also be sure that your bank and local post office are aware of all your personas, or you may have trouble cashing checks.

Writer’s Relief has been working with authors who have pen names since 1994. We manage the submission process for writers of books, stories, poems, and essays. We help writers connect with literary agents and editors through careful, targeted submissions. We’ve seen some great pseudonyms over the years—and we welcome the opportunity to work with you, whether you have a pen name or not.